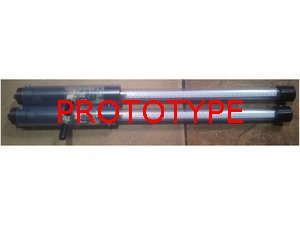 Magic Poi, with the firmware written in Platform.io and the web interface in Flask is the future. Currently I don’t have a working set*, though, and due to upcoming shows I needed to make some changes to the existing Smart Poi.

*Due to other commitments, the company who are doing the hardware design for me have put the build on hold for now.

LiPO batteries instead of NIMH

I have resisted using LiPO batteries for my projects up until now, but since I was already getting some for my K8 equipment upgrade I bought some 1000MAH LiPO batteries for the 32px poi. The voltage regulator I have in the circuit (LM117) is not optimal for these, I believe that it is not using the batteries full capacity – but it does work!

At the time I wrote much of the Android app which pairs with Smart Poi (in 2017!), I was set on having all of the patterns stream from the smartphone to the poi over WiFi. In the real world unfortunately I found that due to WiFi interference this was not possible at most venues, where the 2.4GHZ spectrum is saturated and the stream stutters. So I made a way to upload and display patterns directly from the ESP8266 flash. Initially this was done with UDP as the streaming was taking place, then I moved over to http post. The latest update to the app disables UDP while the post is being sent, so uploads are really fast. I hope to refine this and port to the 72px version as well in the near future. You can get the apk for the latest version (so far only tested on Android 10) here – any future updates will be made to the same file. *Please note that the text message option still crashes, I am looking at this as a matter of urgency! Also, on first run the app sets up some example images and may need a restart (possibly even a phone reboot) to work correctly.

I am working on a basic single colour version of “Magic Poi”. The plan is to eventually replace all of my juggling equipment with internet enabled equipment which can sync using a web interface, like “Magic Poi”. The first test page is up here: http://magicpoi.circusscientist.com/basic and includes a colour change function and a really cool “Automatic Poi Simulator” visualisation which was kindly shared with me by Danny Thomas from kaien.com. Eventually this page will have a timeline (to music) function, and ability to download to the equipment. The firmware will also include offline capability, which will disable the WiFi to save power during operation.

Many thanks to all those who continue to support this project. Smart Poi continue be a part of my performance every week. I’m inspired by the thought of enabling more people to make reasonably priced POV poi and other LED equipment which can do as much as, or more than the commercial versions.

As always, if you haven’t already, head on over to the Smart Poi Overview page and sign up to the newsletter for occasional progress updates. Feedback is welcome.

PS: did you know that every time someone visits my website, an LED flashes on my desk? I made an online service and open source firmware for the D1 mini which means that almost anyone with a website can have the same functionality. Check out https://www.circusscientist.com/led-website-indicator/ if you are interested!

Several years ago I read an amazing scientific paper on the mathematics of Poi patterns, by DrexFactor – you can have a look at the web version here.

So recently I was thinking about it again and managed to plug some of the formulas into a Processing sketch:

I have always enjoyed emulation software for juggling, it’s amazing what you can do – juggle 100 flaming swords for example (or make an LED juggling emulator, like this one I made) Anyway, it turns out that there isn’t anything similar for poi spinning.*

*UPDATE: turns out there are quite a few. Thanks Reddit! Here is one of my favourites, done in Processing: http://www.kaiein.com/poi_auto_sim/

**UPDATE 2: Danny Thomas from kaien.com kindly let me use the code for my own emulator – I’m using this as the base for a new single colour version of “Magic Poi”, “Magic Poi Basic”. See the demo here: http://magicpoi.circusscientist.com/basic